So.. I have been having nightmares since the plane crash.. I have had 2 in particular.

The first one was this..

I was going on holiday and obviously, I had to go by a plane. I was so nervous and basically I didn’t want to go on the plane, but I didn’t really have a choice. Anyway I get on the plane and I was a nervous wreck. Trying to force myself to sleep so even if the plane crashes hopefully, I won’t feel it. The turbulence were tortures.. and luckily I woke up..

Second dream is this…

This time I was in Nigeria. I once again had to get on a plane to go somewhere. Not sure where. Once again, a nervous wreck, I go on the plane and I was waiting for it to take off.. after all, the sooner it takes off the sooner it’ll land. But it did not take off. It kept moving on land. Then I looked out and noticed that were on the main road. I asked why we were not flying and I can’t remember why were not flying. All I know is I was pleased we were not flying….. and then I woke up

I know they are not exactly what you will call nightmares, but I have never had issues flying on a plane before. Plus this is two dreams in one week… I also like the way the plane in Nigeria did not take off and stayed on the ground.

I went for my dress fitting and my dress was snug – as in, it fit so well that even a piece of paper cannot come between me and the dress. LOL a sly way of saying I need to lose a bit of weight just so I can breathe. I am very crappy at diets. I just don’t do them. I was once a size 14 and one day I found myself a size 10. I thank God but I promise I didn’t go to the gym and I did not diet. Long story short, the lady at the bridal shop says I need to be disciplined and go on a diet. So on my way home that day, I was craving Sushi, I dropped by Yo Sushi and bought teriyaki chicken and rice and a sushi pack to go. Got home and made some jollof rice and chicken. This is the person they told to diet o! Basically, when you say diet, I eat more! My brain just works that way..

So this evening, I decided to be good and consciously think about what I was going to have for dinner. And this combo came up. Please see a picture I took below. I just bought some fish, broccoli, avocado and carrots and chopped some peppers and just threw healthy things together and roasted it. The plate looks sparse but what is missing is carbs! I am not promising I will eat like this everyday, but I will try.

Why does healthy food cost so much and then they wonder why people are fat? A Macdonalds meal would have cost me way less than this dinner did.. *Sigh* it was yum though. 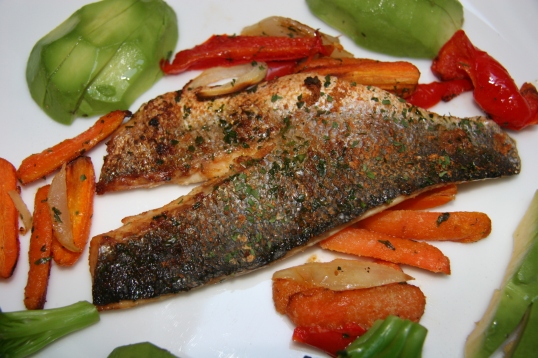 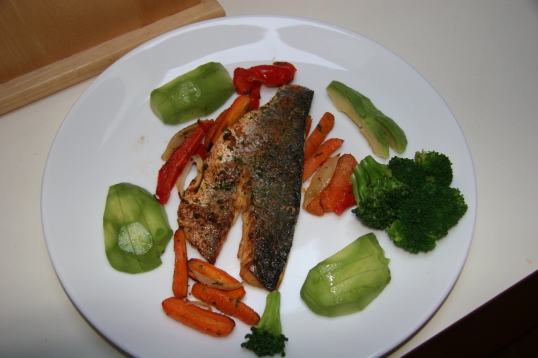 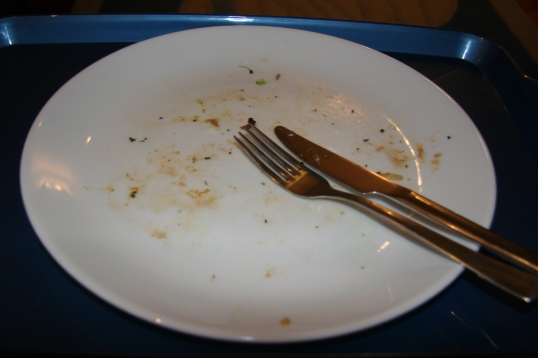 …an empty plate says a lot!

13 thoughts on “Nightmares and fish”

It will be lovely to read your comments.... Cancel reply

This site uses Akismet to reduce spam. Learn how your comment data is processed.